My City By the Bay

Yes yes yes, it has been a long time since I've posted. Now I'm back with a race report.
2012 was a year I focused on high points and less on running/racing, other than to get into shape for Mt. Hood and Mt. Rainier. We had bad weather on both and summited neither. Both were great experiences and I learned a lot, but I was left with a pang of disappointment from having to turn around twice. Over Christmas, we did manage to salvage the high pointing year by getting to the high point of MS.
Since Rainer in Sept, I ran a few trail races which went fairly well. Mid Oct. I did a trail half where I was out run in the last 200m and took 3rd in my AG. I did a Halloween race on Halloween which was fun, but in the dark. I got off course and ran about 2 extra miles which cost me a few places in the standings. Oh well.
Early Dec. I ran the Coyote Ridge 20 miler. I had wanted to run this last year but didn't feel I was ready so I ran the 10. It's a challenging but beautiful course. I set a sub 4 hour goal which I met with a 3:51:23, good enough for 3rd in my AG, 7th woman. Totally happy with that.
Coyote was a test for the New Years Day 6 hour run. Last year, Loren and I volunteered and had a lot of fun. I got the idea in my head that perhaps I'd try it. I've never had much interest in running ultras (FYI, I still don't) but I thought a timed event would be an interesting challenge. No pressure on distance, if things suck, you just stop. I wanted to see how things went on the 20 miler before signing up. I signed up shortly after.
I had been training as if I was going to do it and I used a modified Pfitz 12/55 plan (for those not familiar, it's a 12 week plan peaking at a 55 mile week). I cut out almost all the speed work and my peak milage was around 48 miles. I've trained for several marathons using this plan before and it's worked well for me. My longest run was still going to be 20 miles, which I did twice.  Although I didn't do speed work, I did hills. Lots of hills. I don't have much of a choice where I live but I've come to really like them and I think they've made me very strong.
The New Year's One Day is put on by Coast Trail Runs. All of the trail racing I've done here in CA has been put on by them. They do great events. There are 3 events of the 1 day: 24 hours, 12 hours, 6 hours. When people tell me I'm crazy for the 6 hours, I point out the 12 and 24 hour options. I look totally sane. The format is complete as many laps of the 1.061 mile loop as you can in the time given. You must complete the whole loop for it to count.
Based on last year's race, I set a goal of 30 miles which is 29 laps (every 16 laps gives you another miles with the .061). Loren thought I'd do 32 miles.
Up until race day, the longest I'd run was 26.2 miles, a marathon. I've done that over a dozen times but as anyone who's every run one knows, things get interesting after 20 miles. I wasn't sure how I'd be after 26 miles. Of course, no pressure to even make it that far if I wasn't feeling it.
Loren and my running sisterwife Barb came to volunteer at the event and both offered to run some with me. A few things I was keeping in mind before starting was how to fuel and not to go out too fast. I didn't want to have 6 hours of gels so Loren made some risotto balls with cheese and balsamic vinegar. They were awesome.
The 6 hour folks lined up at 6pm, there were about 60 of us, the largest of the 3 races. The 12 and 24 hour people were already out on the course.
At the start/finish area, there's a huge clock, timing mat, and monitor. Each time I crossed the mat, my name, lap, lap time would pop up on the monitor. Very helpful since after 10 laps I was loosing count. I wore a watch and had the timer just running which did get helpful later in the race as I got tired. I would stop into the rest area every 3-4 laps. I never stopped for very long, usually I would let Loren know I'd be coming in the next lap and what I wanted and I would grab and go or stop very briefly. After about 2-2.5 hours, I put my ipod on for a while. Normally, I never race with music. This is a bit of an exception. It's laps. In the dark.  It's not like I'm missing any great nature or scenery. The music helped, it gave me a little giddy up.

Not to say there weren't some beautiful things to be seen. The Golden Gate bridge is always beautiful. It was a little cloudy when we started but as the night went on, it cleared up. The moon came up in very dramatic fashion. It was low and huge for a long time over the Bay and was stunning.  A short time later, someone launched flaming lanterns over the Bay. It was very surreal in my getting more tired by the lap stage. They looked like giant fire flies, one thing I miss from the East Coast. They lifted up into the sky and just burned out.
As I came around on my 19th lap (mile 20) I was feeling low. My hips hurt from all the flat and the turns. 20 miles is the traditional wall and I was feeling it. I had had 2-3 rice balls, 1-2 gels, 2 small cups of soda, some sports drink, and water up to this point. When I came into the aid station Loren said I looked very sad. I was just having a bit of a moment. I hadn't done any walking and she suggested I walk a bit to break things up. I asked Barb to join me on my next lap around.
Lap 20 and Barb jumped in. I was taking walk breaks for short stretches after the start/finish area. I picked a street sign to walk to then started running again. I'd say it was less than a quarter mile. I'd have some laps where I'd run the whole way through.  I got over the wall and was feeling better.
Before the race started, I had a couple of things in mind. 1. I wanted to run 30 miles. 2. If I came around the staging area and there was 20 minutes or so to go in the allotted time, I would go another lap. Of course, these are easy deals to make before the race even starts.
As the laps ticked off, I started doing math (all runners know this is never a good idea late in a long race). I was pretty sure I had enough time to get my 29 laps in.
When I came around on lap 26 or so, my name popped up in red. Somewhere I got the idea this meant I was in the lead (it didn't, it meant my timing transponder was weak) but I started running like I was in the lead. With so many people on the course doing different times and the darkness, it's pretty impossible to know who's in my division or what lap people are on.
I debated my 29 lap idea.
Barb asked about the red and when I realized I wasn't (for sure) in the lead and really had know idea where I stood, I then decided yup, I can get 29 laps in and then I'm finished. I don't care how much time is on the clock or where I am or anything like that. 29 and done.
I felt good about that, my 30 mile goal complete.
When I finished lap 29, there was about 16 minutes left. I went through the timing map and over to the aid station and told Loren I had hit 29 laps and I was done. She looked at me like I had just sprouted another head.
She was like, oh come on. One more. You have plenty of time. One more.
Damn it.
Off for one more I went. And Barb came with me.
When I finished my 30th lap, my watch said 5:55. Five minutes to spare.
30 laps, 31.83 miles. I think Loren wanted me to do that last lap so she could be right about me running 32 miles.
I was tired. My legs weighed at least 200lbs each. And I felt great.
We hung around for the awards, the 12 hour folks finished with us at midnight, and the 24 hour folks were still out there.
I was 2nd woman (winner did 32 laps) 11th over all (out of 62) and won my age group. Not bad, not bad at all.
But I'm sticking to shorter races thank you very much. 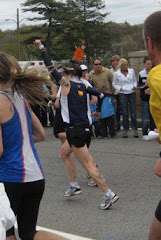 When Where Why How